A few years ago, the United States Navy launched a new recruiting and marketing campaign using the slogan: “America’s Navy – a global force for good.” The line was apparently a flop, and the Navy threw it overboard for “protecting America the world over,” but I liked it. I thought it captured a deep truth about the Navy, which is that it is undoubtedly a “global force” and that the force exists for a good purpose, but I guess most people thought that it made the Navy sound too much like a bunch of social workers.

I was reminded of the phrase, and of an experience I had while serving in the Navy Medical Corps, when I read a recent article in the Annals of Internal Medicine.  A Navy physician retold the story of a mission he was on to a remote village in Honduras. He and his team were flown into small villages, where they would “see dozens of patients each day and dispense an assortment of symptomatic medications” and where “the most practical health benefit that we provided villagers consisted of hundreds of tooth extractions.” He further noted that “although advertised as humanitarian missions, these exercises provided US military personnel with experience working with military and civil authorities from host nations.”

It was in that context that he was confronted with a desperately ill little girl, who had been brought to the makeshift medical facility with peritonitis from a ruptured appendix. His initial request to have the girl medevac’d to a regional facility was denied, and only later authorized when he framed the request as necessary to prevent her from dying in front of the American military personnel who were there.

My own experience was less dramatic, but in some ways similar. I was serving on a training/humanitarian mission in 2010 in Indonesia aboard one of the Navy’s two dedicated hospital ships, the USNS Mercy. We also provided care in remote villages to underserved populations who had no regular access to care. We too saw dozens of patients and were only able to provide simple treatments for most – antibiotics, analgesics and the like. Some were brought on board the ship for surgical interventions, but the complexity of procedures was limited by our sailing schedule (we couldn’t offer an operation that required a week’s recovery if we were leaving in 3 days). The most frequently performed operations were cataract extractions and repair of cleft lips and palates, both of which delivered a huge positive impact.

One day, one of our “on shore” teams radioed the ship to seek permission to bring a child aboard for a diagnostic evaluation. This was not standard procedure, but the boy was sickly and cyanotic, and it was clear to all that he would die in his village if we did nothing. Here we are on board: 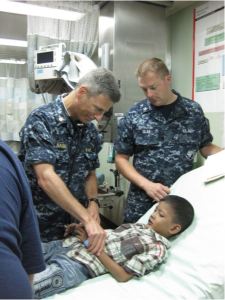 With the help of our entire team, we found that he had transposition of the great vessels, and were able to make arrangements with a local charitable foundation to get him to a major center for definitive evaluation and possible surgical correction.

What do you think?

2 thoughts on “A Global Force for Good”

The views expressed here are solely the personal views of Ira Nash, MD and do not necessarily represent the policy or position of Northwell Health Physician Partners, Northwell Health or any of their affiliates, employees or physicians.